Cow heads and the 5 peak challenge

Day 1 - After arriving at camp on the truck, "Kong," at 6pm we settled into our tents the girls all bundling into one and the two lads taking one each. That night we met Monica the housekeeper and sat down for some dinner. Dinner at the Octopus (the main tent) was closely followed by a number of beers and ice breakers for us all to get to know each other before heading to bed.

Day 2 - The morning bought a slower start as we went through how the camp operates, the safety briefing and the itinerary. Then we went for what Red defined as a "light" hike; this was not accurate at all! Half way up a vertical rock face, sweating and unable to breathe we realised our differences with his definition. However, we powered through making it to the top where the views were breathtaking and for sure worth the trek.

Day 3 - Today's task was to destroy some invasive tree species. We all loaded onto Kong and drove to where a few trees had already been cut down to stumps. We hacked the branches into smaller pieces for kindling with saws, axes, and machetes, then set the base of the stumps alight. We took lunch while the stumps burned, then moved on to our next location, where we cut down a handful more trees to be burned later. The day ended with a warm dinner made by Raul (the chef) beers, and several rounds of cards. 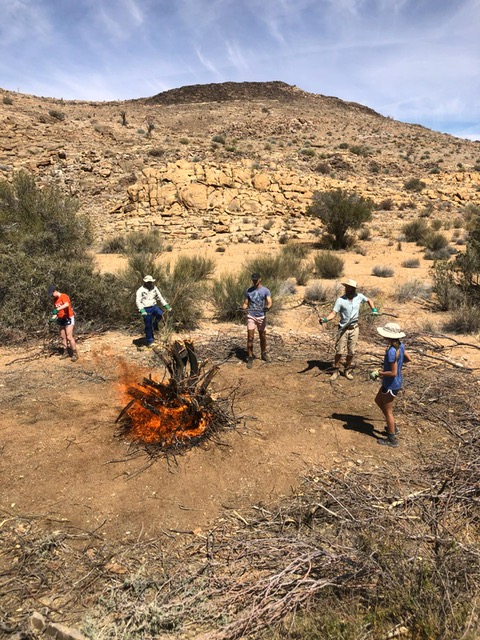 Day 4 - Today we did our first walking transect, which is when we cover a certain area of the conservancy and record data on animal sighting, dung, and tracks in an app called CyberTracking. We walked about 8 kilometres and collected lots of data on kudu, eland, oryx, zebra, and others. This was nowhere near as difficult as Red's so called "light" hike. After dinner we did a driving night transect and saw a few klipspringers and many cape hares.

Day 5 - We did a second transect today, this time hiking through a gorge and then dragging ourselves up a mountain. Later that afternoon we looked at footage from camera traps and compared leopard spots to ID them. That evening we had another delicious dinner and headed to bed.

Day 6 - This morning a cold front came in so we all bundled up in all the clothes we own and piled into the truck to check some baited camera traps. Most of what we found was mischievous mongooses. Then we drove to three different water holes and set up new camera traps. Nina almost stepped on a horned adder, which was our first snake sighting. Along the way we saw a small herd of zebras galloping along a ridge. That night was so cold we couldn't stay outside in the Octopus so we all piled into one tent for drinks and cards.

Day 7 - Coldest day by far. Once again we layered up in all our thermals and jumped in the back of Kong for a driving game count. We saw a red hartebeest right in front of us, which is pretty rare. That night we all huddled up and watched Manchester-By-The-Sea on the projector, but none of us really liked it.

Day 8 - Today we started constructing a water hole for the animals. We dug a hole, shovel-mixed a batch of cement, and laid flat rocks in the bottom. We spent the afternoon logging info on leopards into the Namibian Environmental Information System Atlas. In the evening we went for a "sundowner" which consisted of climbing a hill overlooking some plains, beers in hand. The way down was a little tricky. 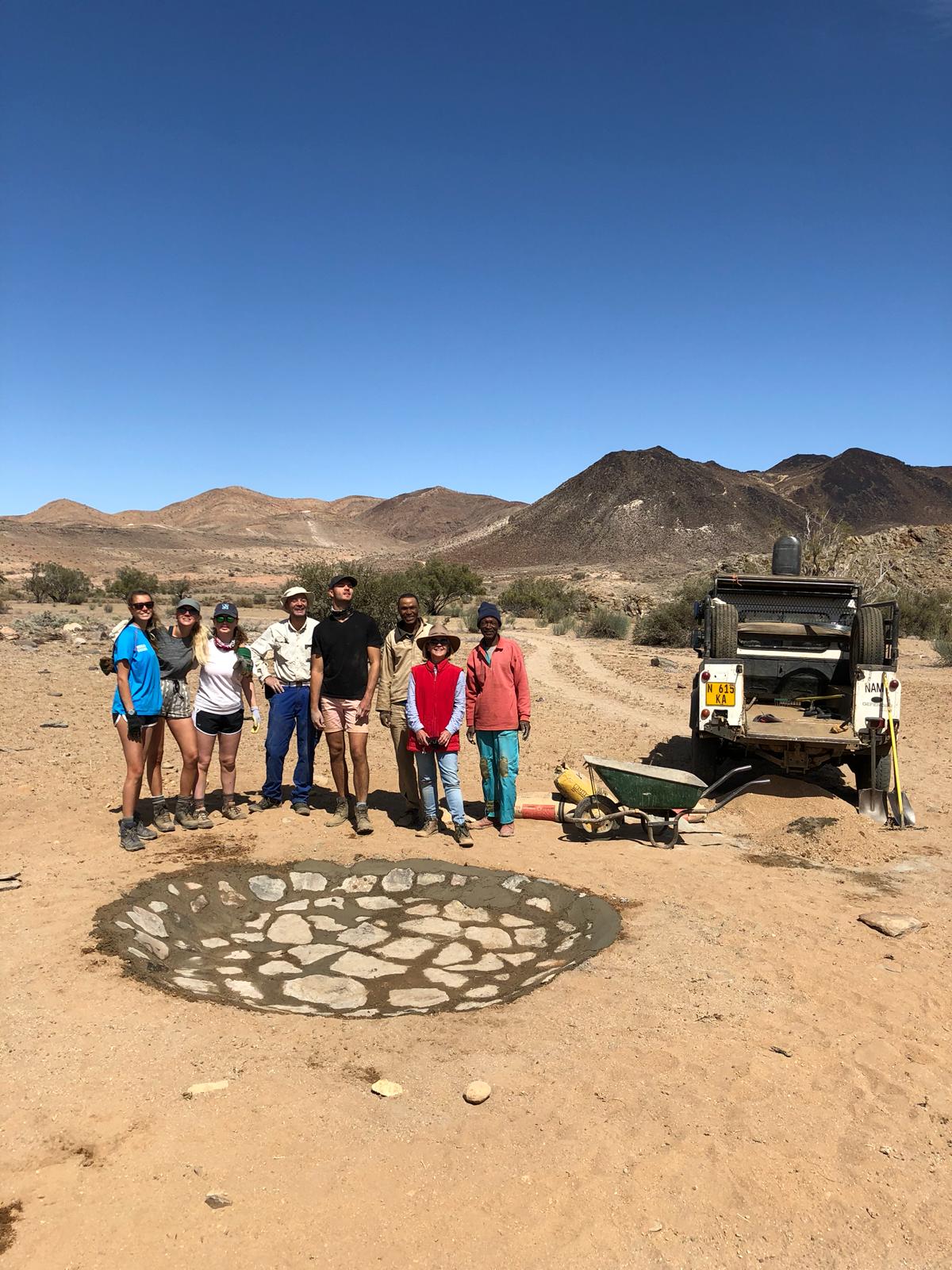 Day 9 - Today was an interesting day to say the least. We prepared fresh cow heads and hooves for leopard bait. Each of us took turns stabbing thought the hooves in order to thread a wire through and hang them from a tree. The first time was terrifying but by the third head we were a little more used to it. Then we went back to finish the watering hole and put cement and stones around the edge. That evening we all enjoyed very thorough showers. Dinner was hamburgers, which we all found ironic and mildly disturbing, but delicious nonetheless. 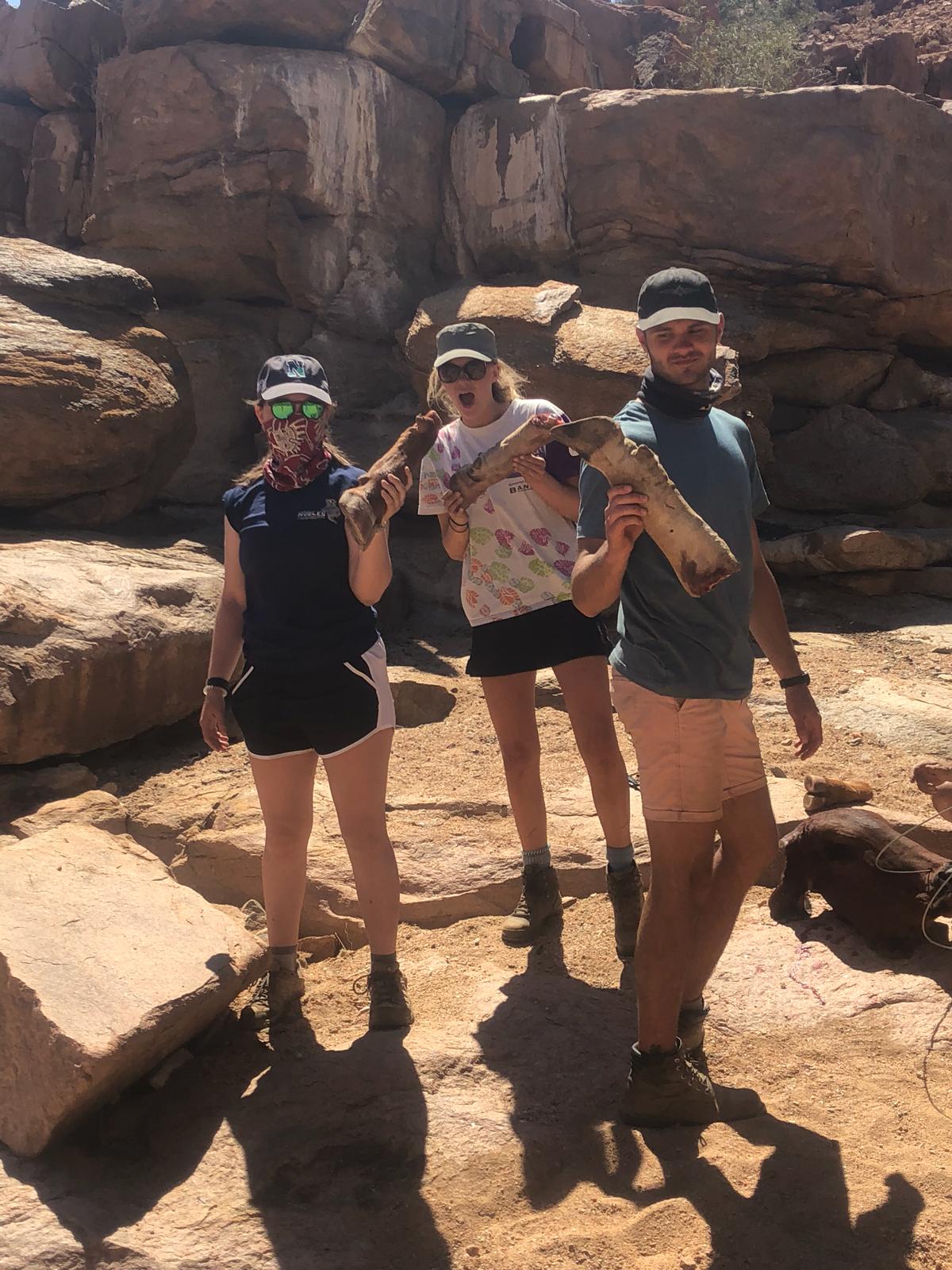 Day 10 - Peak day. Our task for today was to climb five peaks and spend an hour on top of each recording all the wildlife we could see. We woke up at 6am and were at the top of our first mountain by 8:15. The first two peaks were the hardest and also unsuccessful in terms of finding game, but again the views were worth it. The last three peaks were more fruitful and we finished up and got back to camp, completely drained, by 6pm. Dinner never tasted so good and it was early to bed for all of us.