Our Namibian adventure has started

We all met at Costa Coffee and went straight though security and got on our plane straight to Jo Berg. We then boarded our second flight to Upington where we saw the amazing desert scenery for the first time. Upon arriving we met Roland (an absolute PENG LIT LEGEND) and Red our leader. We then drove to the South African border where Angus had his bag searched for guns, luckily they didn’t find anything.

We arrived at Oana Reserve where we saw the Oryx - our first wildlife. We arrived at camp where we were greeted by Andrea and were shown to our luxury tents and then had a group supper of pasta and sauce before an early night, ready to start our adventure. 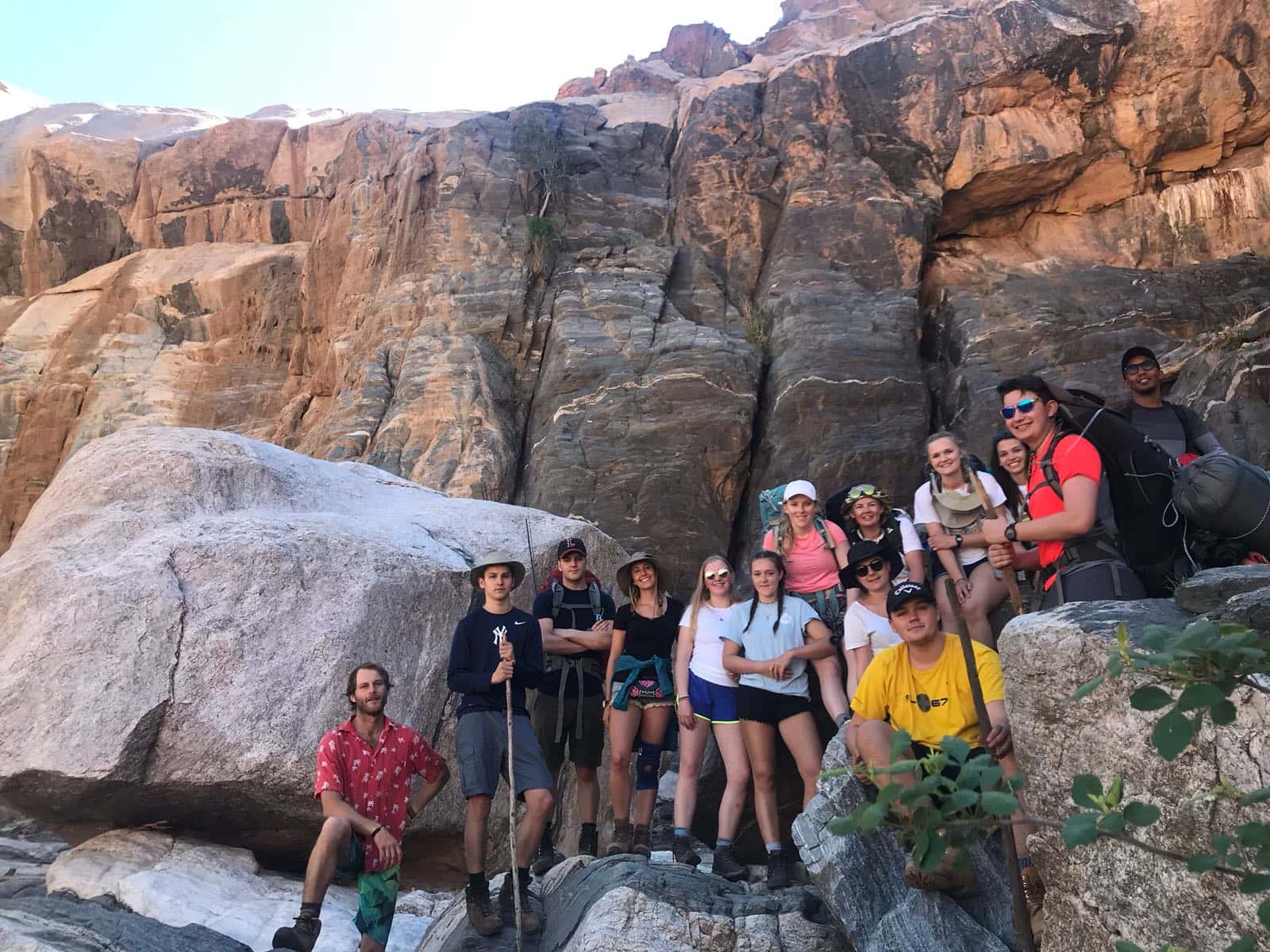 After a relaxed start and amazing breakfast Red taught us about Oana Reserve and the importance of us helping with their conservation. The PHD student Viktor showed us some leopards on a camera trap he did the previous day. We then went for a hike around the reserve so we could get to know the area better. It was incredible with mountains, plains and black eagles. The trek was tough with Amelia falling on a cactus - all so we could see the black eagles and their nests - which was definitely worth it. 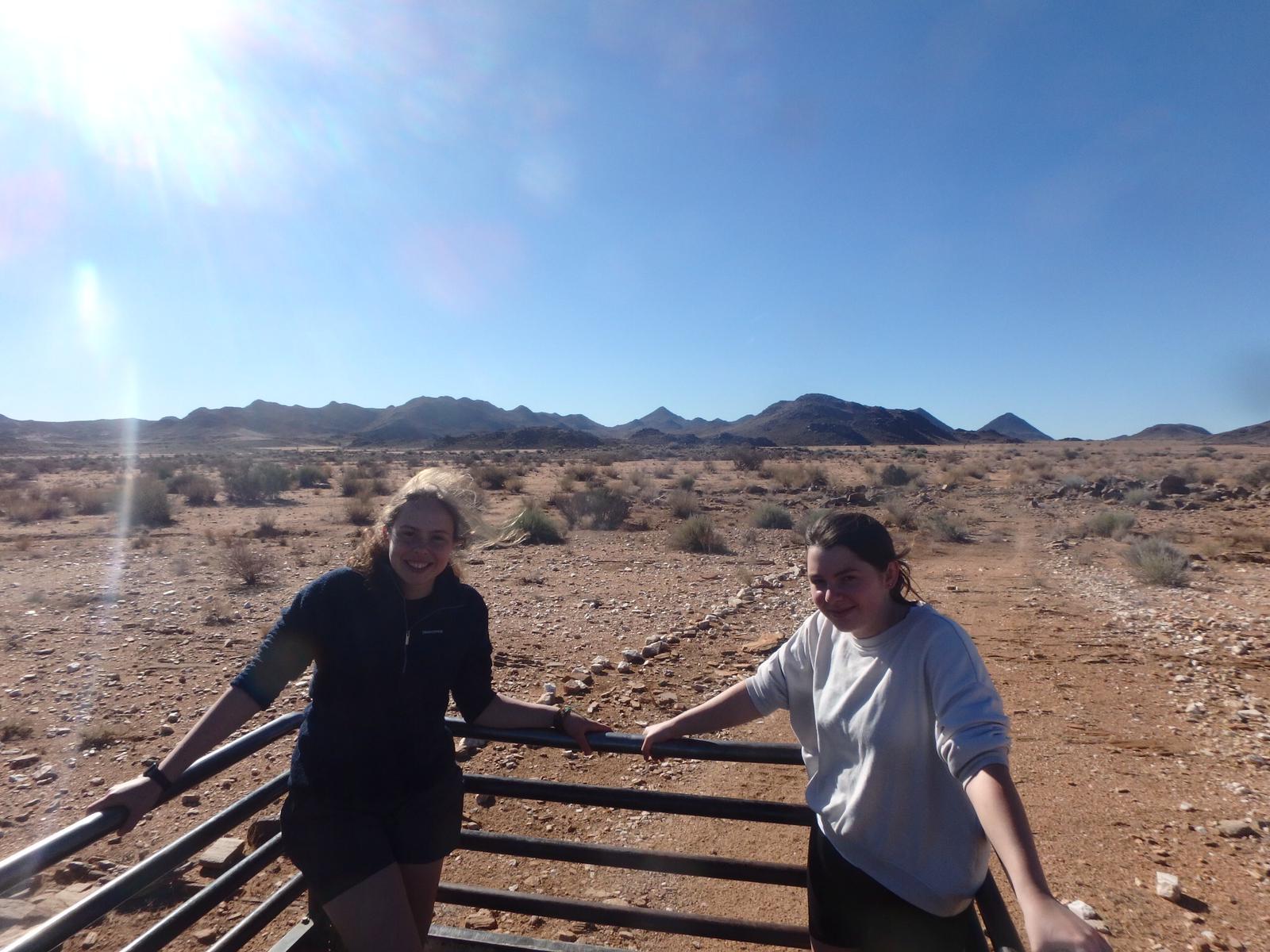 Our first day of safari. We climbed up 4 peaks over the course of the day to do a peak count in certain areas to help monitor the game population. On top of each peak we had our binoculars ready and could see mountain zebras, oryxes, springboks, elands, Red hearter beast and clip springers. Later that day we all cooked an amazing vegetable curry. That night when Angus went to wash his hands he found a tiger snake next to him, Stella and Amelia then came to his rescue and took pictures. Luckily this snake wasn’t on the dangerous chart.

Conservation work today. We drove to a fence which needed to be taken down so the wildlife could roam around a larger area. We spent all morning on the job and got half done. We then had a brief lunch then went back at it with some of Roland’s sick tunes playing in the background on Stella’s speaker. Professor Barry Lovegrove then arrived and showed some of his incredible wildlife photography which put Stella and Angus’s photos to shame.

We drove to a place with incredible views - looking like it came from Westworld. Barry then gave us a fantastic history lesson on South Africa, Namibia and the Bore War. Next up was a visit to a canyon where the leopards are known to pass through, which was true as we saw a few tracks. At the end of the day we walked up a ridge to see probably the best sunset in the world. We then had our first Namibian beer, cider and South African wine. Barry then showed us where the southern cross was, told us that he couldn’t understand Amelia’s northern accent and Stella spoke like the Queen! Ha


PANCAKES FOR BREAKFAST :) We went out around the reserve with Roland, Barry and Red to look for flowers and insects. We saw an amazing stone grasshopper which could disguise itself around quartz. We also found flowers which also disguises itself the same way, which we weren't expecting. We then spent the afternoon setting up camera traps at the water holes, Stella with a sledgehammer is quite terrifying, not gonna lie. Barry then found a horned adder and put it in a plastic box which was amazing, but safety wise quite terrifying so Andrea put a rock on the lid...

VERY, VERY early start. We drove to chop up some trees which are invading the land. We got our machetes, axes and saws out which Amelia was VERY happy about. Angus and Amelia with the help of Roland started to chop down a tree whilst Stella, Ed and Andrea started to burn stuff. Amelia + machete = happiness. We then swapped around so everyone could machete/axe/set fire to things. We all then started to make bait for the small mammal traps of peanut butter, oats and bovril which weirdly Amelia was in charge of... Later that day we set up camera traps with the aim of filming some leopards and when it was dark we set up around 150 mammal traps which we did very quickly. #german efficiency

Conclusion from the week.

This first week has been incredible. We have had so much fun. Red and Andrea are the best, Roland is a legend and Professor Barry is an amazing guy with great knowledge and even greater quotes which we will remember for life such as...

“if you see something catch it”

“Amelia, I can’t understand a word you are saying with that accent”

“Angus, I’m going to use your shirt to start to braii, it’s horrible”

Sounds awesome, tell me more about this program.