Top 10 Extreme Activities to Enjoy on your Travels

This blog is for the thrill seekers out there.

If you’re not sure if that’s you, have a read because either the thirst for adventure or the sheer alarm and terror that hits you will let you know!

Below are 10 of my favourite adrenaline-inducing activities that are definitely worth working into those travel plans.

In my opinion, we should all live life on the edge. We only get one chance on this Earth and, as Neale Donald Walsch said, ‘life begins at the end of your comfort zone.’

Snowboarding is so old school.

Is there anything more hard core than hurtling down the slopes of an active volcano at speeds of 90km/h?

First you’ll have to hike up the volcano. Then you’ll climb aboard your reinforced plywood toboggan, staring down the steep ash-covered slopes and take a few very deep breaths.

Next thing you know, you’re off. With the added feature of using your heels to brake and steer, this experience pretty much redefines extreme!

Pioneered by an Australian traveller in León, Nicaragua, the city’s nearby Cerro Negro volcano is still the most popular and extreme slope in the world.

At Big Foot Hostel, they run daily trips to the site, with mojitos included to calm the nerves!

If you’re looking to take the ultimate ‘living on the edge’ picture to show off your courage to friends, this is the activity for you.

The mighty Victoria Falls spread 2km wide. Aptly named ‘The Smoke That Thunders’ by locals, the deafening and spectacular explosion of spray can be seen 30 miles off.

It takes a rocky walk and swim in the famous Zambezi to reach Devil's Pool. The fearless (or perhaps insane) ones can then leap into the pool before getting pushed to the edge by the immense force of the river.

You'll be pleased to know that the natural rock walls of the pool come just close enough to the surface to form a barrier from the edge.

Now just imagine the totally exhilarating feeling of peering over the brim of the world’s largest curtain of falling water.

You’ll feel the sheer force of the Zambezi flowing past and crashing down over the precipice: a hundred meter drop beneath you.

Why not embark on a glacier hiking expedition amidst some of nature’s most awe-inspiring backdrops?

These chilly adventures are the best way to experience the unique crystalline beauty of the world’s ice. Imagine Elsa’s ice castle and scale it up by 1000…

Before they disappear, pull on your crampons and take a breathtaking stroll across a glacial valley. As temperatures rise, most of the world’s glaciers are receding, so go now or it’ll be too late.

I guarantee that exploring the incredible ice caves and mesmerizing formations will be totally unique to anything you’ve done before.

Scuba diving is the activity to do if you looking to get that thrill-seeking adrenaline surging in the most relaxed and peaceful way possible.

For the most unforgettable and remarkable of dives, it has to involve a wreck. Exploring the mystical setting of a sunken ship gives an eerie tingling feeling like nothing else.

Claiming the title of the best wreck dive in the world is the Yongala in Australia. Marine life swarms the wreck’s interior and the beautiful coral surrounding.

You’d almost be unlucky to not catch a glimpse of the manta rays, sea snakes, octopuses, turtles, bull sharks, tiger sharks and clouds of fish that dwell in the area.

Each wreck also has its own fascinating and unique history. The 109m long Yongala for example, sank off the coast of Queensland during a cyclone in 1911, killing 122 people, a racehorse called Moonshine and a red Lincolnshire bull.

It's feeling of being at one with the ocean that's just so magical. So still beneath the rushing waves, so silent in the peculiar and immense underwater world.

Fancy a real trip to the wild side?

Well, I think you’ll find that jumping from a plane over 10,000 feet in the air and then plummeting (literally, at 200km/h) back to Earth is just about the ultimate thrill.

There’s nothing more magical than seeing the world from a bird’s perspective-everything so miniature and serene.

There are heaps of jumps all around the world with spectacular views if you can keep your eyes open.

How about whale watching from thousands of feet up in the air? Then witnessing dolphins frolic in the deep blue waters before landing on Sydney’s famous Wollongong Beach.

Or you could choose a city jump. How does flying over Dubai’s Palm Jumeirah with a mind-blowing view of the Persian Gulf on the way down sound?

You could spend months preparing, and then another two climbing, the world's highest mountain... or you could just fly on past it.

The self-proclaimed 'world's most elite skydive' allows adventurers to leap from 29,500 feet. That’s higher than Everest's summit by the way, and you’ll float gently back to base camp. I know which one I’d do.

This activity gives you a taste of it all. Leaping from great heights, rappelling down the face of waterfalls, hiking across stunning surroundings, swimming through magical caves and canyons, and so much more.

There’s no better place to start than around the Arenal Volcano area in Costa Rica.

After a quick hike through wonderfully lush rainforest, it’s time to gear up and start rappelling. Huge rock faces, gushing falls and vegetation covered cliffs are just the start of this adventure.

If you’re heading to the Southern hemisphere, the beautiful valleys of Wannaka in New Zealand are calling your name.

All the gorge related thrill can be found here: from epic jumps and fun slides to massive abseils and some very tight squeezes! Known as the king, the world’s tallest coaster is a must for any adrenaline junkie.

The US Six Flags Great Adventure theme park is the proud creator of Kingda Ka. This upside down U-shaped track bolts up 456 feet into the sky.

Once you’re up, you’ll plummet right back down in a 270-degree spiral that is definitely not suitable for the faint-hearted. How very inviting.. 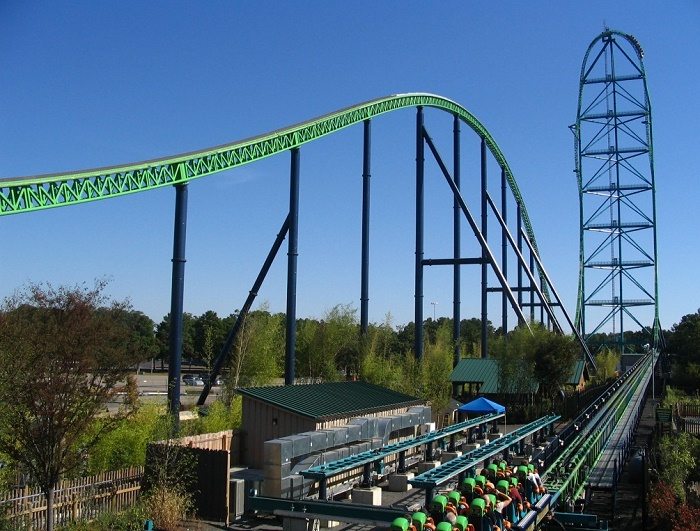 The award for the faster rollercoaster goes to the UAE’s Formula Rossa. Even F1 stars Sebastien Vettel and Fernando Alonso could barely stand the 240km/h of the frankly insane ride.

For the longest coaster, Japan’s Nagashima Spa Land takes the crown. The Steel Dragon 2.5kms of rails have kept this title since the millennium! Could this be the first coaster where the ride is longer than the queue?

Finally, the most inversions goes to our very own ‘Smiler’ in Alton Towers. The ride has a stomach turning 14 inversions. only advice: eat lunch after this one.

If perhaps you think you’re a little more sophisticated than 240 km/h coasters or 200km/h free falls, a leisurely balloon ride is for you.

For me, I can’t think of a more incredible experience than a safari from the skies.

Just picture lions stalking the plains and hippos basking in the muddy waters below you.

Floating silently through the crystal clear skies over the wildlife havens of the Maasai Mara or Serengeti is one of those once-in-a-lifetime adventures.

It's one of the oldest, and finest, ways to see the world. I mean, what other extreme activity allows you to sip on champagne as you go?

Sounds tame I know. However, the kind of jumping I’m talking about is anything but. Think high cliffs and bungee ropes…

In both cases, you'll probably just have time to catch the awesome view before the terror of what you're doing throws your stomach into your mouth and snaps your eyes shut.

Cliff diving is all about the big heights, high speeds, and if you're doing it properly, tiny Speedos. What's not to like?

My first recommendation for this rather extreme form of entering the water has to be Krabi in Thailand. The many protruding rocks offer infinite possibilities of entering the perfect blue-green water.

My second would have to be cliff jumping’s creator: Hawaii. Test your warrior spirit in Oahu where King Kahekili used to do just that for his own warriors. If you fancy falling from even higher up, I’m afraid to say you’ll need a rope attached.

If I were you, I’d just go right in for the big one. Mostly because you may never want to take this leap of faith again!

Set amid the lush ecological treasures of South Africa's Garden Route, the 216m-tall Bloukrans Bridge is the highest bridge bungee in the world.

Before you back out, you should know that you’d be following royalty. Prince Harry’s made the leap and we know he survived.

Hello sheer terror. Hurtling over thundering rapids in a tiny rubber boat, equipped with a plastic oar and a whole lot of fear, really gets that heart beat up to danger point.

There are various classes of rapid, ranging from 1 with a few gentle ripples, to 5 with very violent rapids, highly congested routes, and a significant hazard to life in the event of a mishap.

There is a class 6 too, but that’s left to the experts. I like to call these the unrunnable ones. The rapids are not commercially raftable, thank the lord, as they are nearly impossible, extremely dangerous and pose a high risk to life.

There are rapids for all levels of rafting scattered all over the world, packed with great views and wonderful thrills.

If you’re up for the big one, Africa’s Zambezi River is rated Class 5 for rafting. Probably the most treacherous for commercial rafters.

The thundering rapids, nicknamed Oblivion, Overland Truck Crash and Stairway to Heaven, are quite self explanatory. Just below Victoria Falls, you'll be struck relentlessly by raging waters and faced with precipitous drops and deadly whirlpools. What fun.

This post has either awoken the adrenaline-junkie inside, or caused the realization that gentle hikes, laidback sight-seeing and days of sunbathing on the beach are more your cup of tea.

Whichever the case, I’m glad to be of help!

Let us know about the most heart-racing activity you’ve endured on your travels in the comments below...

Ready to travel and explore the world's most exciting places? Fill out our What Type of Traveller You Are Quiz and we can start by pointing you in the right direction. Simples.

Reducing plastic in our oceans, protecting turtles and saving the rhino is just the tip of the melting iceberg.

All experiences include a mix of projects and adventures, travelling with a team and, of course, are risk assessed.

Podcast exploring our Namibian project and living in the desert